The Bridge to Trailblazer Village 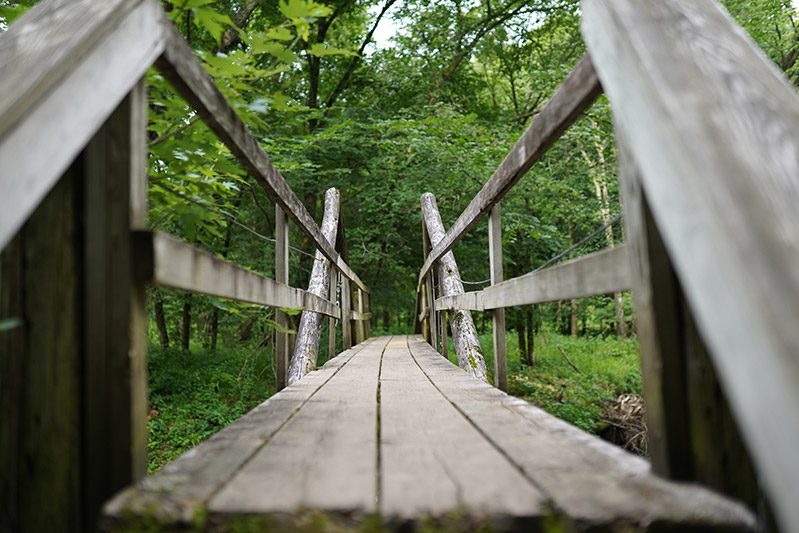 It was just what I needed: that bounce, bounce, bounce as I crossed the bridge to the Trailblazer village. It had been a few years since I had last crossed that bridge. That bridge that has washed away in floods countless times, that bridge which runs along the tractor path. As a Trailblazer, it felt luxurious to not have to haul our luggage all the way across camp. We were grown up now. We were left to fend for ourselves, out beyond the river, cooking our meals over open fires, cut off from the main camp and therefore from society as we knew it. I had never been so proud or exhausted after a week of camp. Over the years as a camper, I continued to grow in my faith with great enthusiasm, and exponentially in my “survival” skills. Like many other Ewalu campers, I sang every song I learned the entire car ride home.

When I ended up as an LT in 2005, I did my shadow week with Trailblazers. Little did my coordinator know how perfect a match it was. It was a journey full circle, back to when I became truly hooked on camp. Oh, these campers are tiny!, I thought. …and enthusiastic as heck! It was a great week of goofing off with these munchkins, teaching them the same songs that I had learned as a Trailblazer. The pride they had from cooking pancake scramble over an open fire felt familiar. The frustration over wet firewood…also felt familiar. I was determined to get these kids hooked on camp.

Many summers have passed since my last at Ewalu. Nineteen to be exact. I had visited Ewalu a couple of times since then, but for some reason always in the winter, when the trails are all but hidden under the snow and the parachutes are packed away. This summer, however, I finally ventured back to Ewalu to stomp the trails again. My boyfriend joined me, and I told him all about camp on the drive up: the endless hunt for fire starter sticks, the ritual of Friday pot scrub, the bracelet making by the pool, and the periodical flooding of the river.

By the time we arrived, the Friday program was over and the counselors were busy bees, cleaning up the camp before the wrap-up meeting. They would soon have a precious 24 hours of break before the next crazy week. Bounce, bounce, bounce. I cried so many tears of joy that day stomping the trails and bouncing on the bridge.  We even broke the rules and sat right down in the outpost patio chair! I pointed out where we slept under the stars as LT’s and where I went river stomping, fearful of getting a leech on my ankle. We went river stomping, just the two of us, and I exited leech-free.