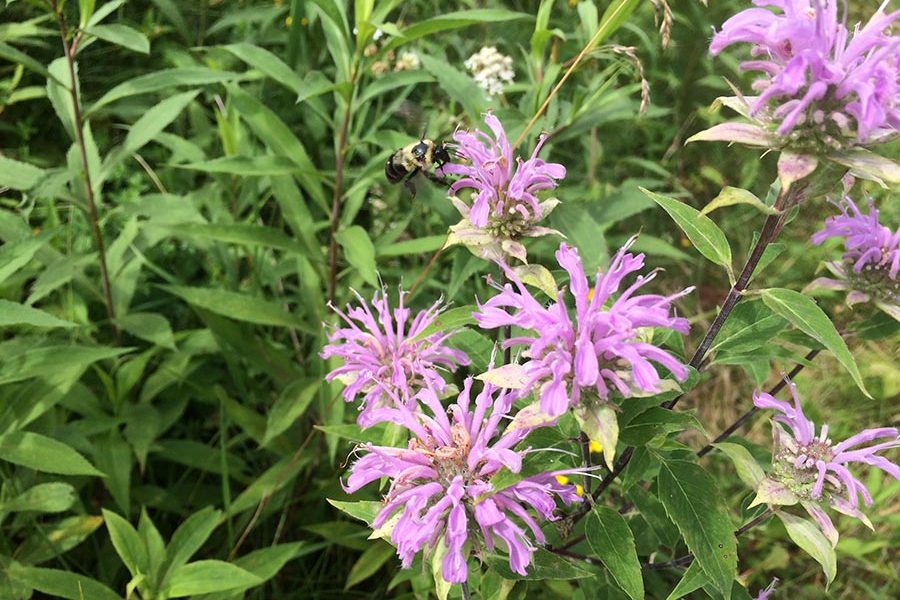 Spring is finally making itself known to us here at Ewalu. The warm sun has revealed that there is, after all, something underneath all that snow and ice. Now that warmer temperatures are livening up the greenery scenery, so too are the animals and insects of Ewalu. With that in mind, there is an idea in the office that has been gaining traction since February. You could say it has been getting lots of buzz.

With the inspiration and help of Ashley Gulrud, Ewalu’s Retreat Host and Program Assistant, we are in the process of building our very own apiary (a place where bees are kept in hives). We will be putting together our hives with the help of volunteers and a local beekeeping club (Northeast Iowa Beekeepers Club). Our bees will be purchased locally from a supplier near Guttenberg. The plan is for the bees to be kept on the Stone Center site (some distance away from the main building as to not affect retreats or camp programs).

The importance of bees cannot be overstated. Roughly one-third of all crops are pollinated by bees alone. If bees were to disappear, certain crops would go extinct (almonds) and others would be brought to the point of extinction (broccoli, carrots, sunflowers, apples). Bees also pollinate clover and alfalfa which are vital for cattle to graze on, helping dairy production. Bees are so vital to the Earth’s ecosystem that Albert Einstein is attributed to saying, “If the bee disappears from the surface of the Earth, man would have no more than four years to live.”

Unfortunately, that is exactly what is now happening to bees. The most up to date information shows that from 2016-2017 beekeepers lost 33% of beehives. What is more concerning is that there are multiple reasons for the decline. Over pesticide use, global warming and changing climate patterns, loss of habitat, declining pollinating flowers, even light pollution are all stressors that are harmful to bees.

There are ways, large and small, that we can do to help the bee population. Installing wild bee hives would give them a home without the stress of having to raise or monitor them. Using fewer pesticides and chemicals in your gardens (chemicals are believed to confuse bees that rely on their own chemical balance). Even mowing the yard less helps local bee populations by increasing the amount of clover and dandelions into their diet.

Overall, we’re very excited to “bee” a part of the effort to help pollinators, whether with bees or the butterfly garden.  In anticipation of bees coming to camp, we have been coming up with bee names (Buzz Lightyear, Beeyonce, Ron Beesley to name a few).  Finally, check out the link to the wish list. It includes items on the wish list that will be used in the maintenance on “BEEwalu’s” apiary.  Any help you might be able to give would be the “bee’s knees.”